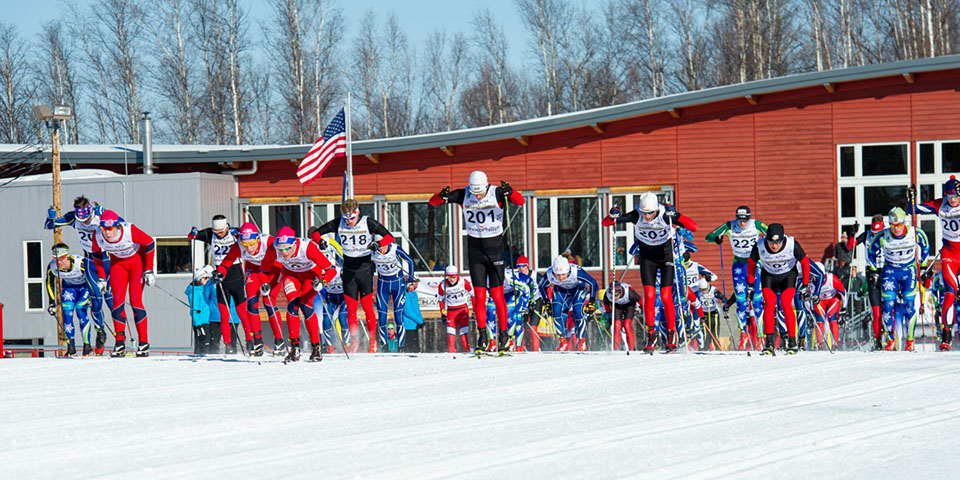 The race will be held on the South Tower 5Km course, the distinguishing feature of which is the South Tower A climb which begins 750m into the race and climbs 39m over 365m at an average grade of 10.7%.  After descending the twisting descent of the Tower Loop they flash through the exit of the Tower Loop and make a sharp right turn onto Roller Coaster, with a quick drop into a right turn up the Medivac B climb (12m ascent over 93m at 12.9%).

Over the top of Medivac the skiers begin a technical descent of Medivac and Roller Coaster, with a fallaway 180-degree left into a right-left S curve and a sharp drop into a roller (the same climb and descent as was used in the interval start classic event). Returning to the stadium via Roller Coaster, at the halfway point of the course, skiers make a 180-degree left around Roller Coaster Island, then begin the ascent of the East Ramp-Sprint Elbow B Climb (20m of vertical over 290m at an average grade of 6.9%).

At the top of the climb skiers make a 180-degree right and descend the Sprint Wall and the Ramp, with a slight detour around the Ramp Elbow before traversing the east side of the stadium.  With 1800m remaining on the race course racers turn right down Sidewinder and begin a descent of Sidewinder, Roundabout and White Bear and over a couple of rollers to the West Range/Pre-Range cutoff where they make a sweeping left turn before heading back to the stadium.

After rolling over the top of the “Two-Step” the course descends and turns right down Big Surprise before beginning the second A climb on the course, the Big Surprise A climb (31m of ascent over 274m at 11.3%) which takes skiers back up to the NE corner of the stadium at which point they have 750m to go.  If a pack is still together at this point, a skier who wants to thin out the group a bit might want to throw in a surge on this climb, which has a few grade changes but has a long, straight, wide stretch which is perfect for passing.

If you watch from the south end of the stadium, you can see the skiers three times: as they emerge from the start tracks, then again at the halfway point of the loop as they round Roller Coaster Island, and again as they descend the Ramp (at 3.0Km) and head across the east side of the stadium.  It is also a short walk from there to the finish line.

In the northeast corner of the stadium you can also see the skiers three times: first, as they turn down Sidewinder, next, at the top of the Groomer Ramp as they top out on the second A climb on the course, then finally, with a short walk across in front of the Birch Hill Cross Country Ski Center you can watch the competitors enter the stadium and head down the lap or finish lanes.

In the two-lap or three lap races, with a little planning and a bit of patience at the points where the spectator routes cross the competition course, a spectator could watch from two or more locations, seeing the skiers at multiple points on the course.

Awards will be presented following each race, or possibly to both male and female skiers after each gender has completed its races.  Stay tuned for details.

Video tour of mass start competition course – South Tower 5Km.  Click on the link to the left to view a video of a tour around the course that will be used for the mass start free technique competition at the 2023 Junior Nationals.